The Taliban on Wednesday withdrew from its prolonged onslaught on the Western Afghanistan city of Farah, after a battle that included air support form MQ-9s, A-10s, A-29s, and MD-530s and almost caused the district capital to fall.
The Taliban entered the city on Tuesday, causing hundreds of local police and soldiers to flee and letting the insurgents largely take control, local officials told The New York Times.
About 30 people, including security forces and civilians, were killed.
US and Afghan Air Force aircraft responded, with A-10s flying “show of force” flyovers and an MQ-9 conducting airstrikes that killed 28 fighters, according to video posted by US Forces-Afghanistan.
It is the latest effort by the Taliban to increase its control in the country, which grew to 12 percent of the population in early 2018, according to the Pentagon’s Special Inspector General for Afghanistan Reconstruction.
The Taliban, along with ISIS and al Qaeda, have regularly conducted public attacks in the country, though US officials repeatedly proclaim progress is being made.
Defense Secretary Jim Mattis told lawmakers earlier this month that “progress and violence coexist” in the country, and that the Taliban is mostly focusing on “soft” targets.


The US Air Force released on 25 May its official request for proposals (*) to replace 112 wing sets on its Fairchild Republic A-10 fleet.
The indefinite delivery/indefinite quantity contract will have a basic five-year ordering period beginning at contract award, two one-year optional ordering periods thereafter, and a four-year delivery period following the end of the ordering periods, according to the RFP notice. 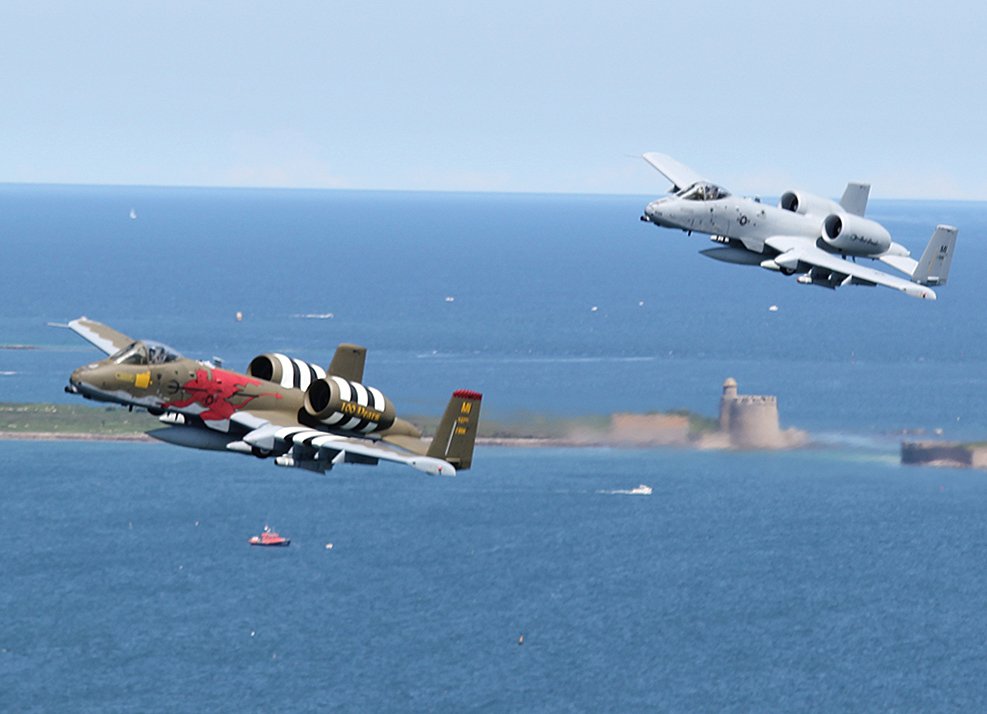 The Michigan Air National Guard's 107th Fighter Squadron flew a specially painted A-10C Warthog over the beaches of Normandy on Tuesday to commemorate the 74th anniversary of the D-Day invasion.
D-Day is one of the largest amphibious military assaults in history, with 156,000 allied troops landing on five beaches and about 13,000 paratroopers dropping behind German lines.
And the 107th, which took part in the invasion, flew a pair of A-10s, multiple C-130 Hercules and even dropped paratroopers over the beaches of Normandy to commemorate the historical event. 
The saying “putting the cart before the horse” surely pre-dates the invention of flight, yet it couldn’t be more accurate to describe the Air Force’s shifting and flawed arguments for retiring the A-10 well ahead of schedule, and before we have a proven, tested replacement.
As an airman, I am concerned about our ability to ensure air superiority as threats increase globally and our capability and numerical advantages steadily recede.
We desperately need a fifth-generation fighter like the F-35 to provide air superiority and guarantee access to targets anywhere in the world.
However, the Pentagon’s backward plan to replace the A-10 and its critical missions with the F-35 — before we even know if the F-35 can perform them — risks losing these vital capabilities permanently and puts the lives of American troops in danger.

The 75th Fighter Squadron from Moody AFB, Ga., has taken over the main close air support role in Afghanistan.
The Tiger Sharks deployed to Kandahar Airfield in mid-July, replacing A-10s from the Indiana Air National Guard’s 163rd Fighter Squadron, according to Air Forces Central Command.
“Our primary mission here is to provide close-air support and combat search and rescue,” 75th Expeditionary Fighter Squadron commander Lt. Col. Sean Hall said in a release (*).
“The majority of our missions will be supporting the [Afghan National Security Forces], whether it be a show of presence or freedom of movement patrol. We’re out here providing over watch to ensure if need be, lethal deterrence against the enemy.”
It is the second deployment for the 75th within a few weeks.
On July 9, A-10s and airmen with the squadron deployed to an undisclosed location in support of Operation Spartan Shield - a US Central Command mission based in Kuwait aimed at deterring “regional aggression” and stabilizing countries in the region.

Approvati fondi per nuove ali per i 'Warthog' .....


The defence funding act also authorises $144.2 million for the A-10 wing replacement programme, some $65 million more than the Trump administration’s request.


The National Defense Authorization Act provides important funding for U.S. military operations across the globe.
This legislation directly addresses the military readiness crisis and includes the largest pay raise for troops since 2010.
In this NDAA, Congresswoman McSally successfully secured critical funding for the A-10 wing replacement program, the F-35 Joint Strike Fighter program, and other crucial capabilities.
The final bill includes a total of $144 million for new A-10 wings to re-wing between 14-20 planes.


President Donald Trump signed the Fiscal Year 2019 Defense Appropriations Bill into law today.
This legislation will allocate $674.4 billion to rebuild our armed forces, restore military readiness, and support our warfighters.
U.S. Representative Martha McSally’s amendment to increase funding for the A-10 wing replacement program was also included in the final appropriations bill.
This amendment increases the total amount of funding for new A-10 wings to $144 million, which will allow for the re-winging of roughly 14-20 planes.
Earlier this month, Representative McSally sent a letter to the Defense Appropriations Conference Committee urging that they include her amendment to fund the A-10 wing replacement program at the full authorized amount.


The future of the U.S. Air Force’s A-10 Warthog ground attack aircraft is as uncertain as ever, but the service continues to upgrade portions of the fleet.
Now, between 150 and 200 A-10s look set to receive a major cockpit audio update that will help manage radio communications and, similar to surround sound in a movie theater, issue directional auditory warnings that immediately draw the pilot’s attention in a specific direction toward a threat or other area of interest.
On Nov. 5, 2018, Air Force Materiel Command announced plans to award a sole-source contract to Danish defense contractor Terma for the purchase of that company’s Aircraft Audio Management System (AAMS).
The Air Force had first indicated that it was looking for a three-dimensional audio update for a portion of its A-10s in December 2017.


Fonte: thedrive.com ... "New 3D Audio Will Allow A-10 Pilots To Hear Alerts Come From The Direction Of The Threat" ...


When Rep. Martha McSally conceded defeat to Kyrsten Sinema for the Arizona Senate seat on Monday, fans of the A-10 Warthog let out a BRRT of disappointment … and fear about the platform’s future.
McSally, a former A-10 pilot and retired Air Force colonel, was the strongest advocate for the platform in Congress, and perhaps the plane’s last remaining protector after New Hampshire Sen. Kelly Ayotte was ousted in 2016 and Sen. John McCain’s death in August.
With McSally on her way out, the big question is whether the Air Force quietly restarts its campaign to retire the A-10.
And if so, does any one step up to defend the Warthog ?

... abcnews.go.com ... "How Martha McSally could end up in the Senate even though she lost the election" ...

... abcnews.go.com ... "How Martha McSally could end up in the Senate even though she lost the election" ...


Arizona Gov. Doug Ducey on Tuesday said he will appoint USAF veteran Rep. Martha McSally (R-Ariz.) to the late Sen. John McCain’s Senate seat.
The announcement comes at the end of a turbulent political year for McSally, in which she sacrificed her spot in the US House of Representatives to run for Arizona’s other Senate seat, only to lose the tight race to Democrat Kyrsten Sinema.
“All her life, Martha has put service first - leading in the toughest of fights and at the toughest of times,” Ducey said in a release.
“She served 26 years in the military; deployed six times to the Middle East and Afghanistan; was the first woman to fly in combat and command a fighter squadron in combat; and she’s represented Southern Arizona in Congress for the past four years. With her experience and long record of service, Martha is uniquely qualified to step up and fight for Arizona’s interests in the US Senate.”
Her appointment is also a tentatively good omen for future funding of the A-10 program, for which she’s been a long-time advocate.
Keeping the A-10 in the fight is on McSally’s shortlist of priority issues—along with veterans and border security—spotlighted on her Congressional website.


Comparative testing of the Air Force’s F-35 and A-10 to measure their performance in combat search-and-rescue, close air support, and airborne forward air control missions wrapped up earlier this spring, and should spur conversations about how best to partner fourth- and fifth-generation aircraft in combat, the Pentagon’s top weapons tester said Thursday.
The 2016 and 2017 National Defense Authorization Acts ban the Air Force from retiring or divesting A-10s until the F-35 is vetted to see how well it can perform the Warthog’s missions.
About two-thirds of the testing was done last year, and the aircraft returned in March for a final look, according to Robert Behler, the Defense Department’s director of operational test and evaluation.
While the flights were intensive and instructive, he noted the tests were not a fly-off.

The Air Force has wrapped up its effort to rewing its A-10 fleet so the Thunderbolt can keep flying through the 2030s.
The Ogden Air Logistics Complex at Hill AFB, Utah, recently installed the last set of new wings on A-10 No. 80-0252.
The plan to install 173 new wings began in 2011, and all but 11 were installed at Ogden ...

The A-10 was designed to fly close to the ground in support of ground troops, dropping heavy loads of weapons and attacking armored vehicles, tanks and enemy personnel.
During the Cold War, the Warthog was meant to help turn the tide in a hypothetical NATO-Warsaw Pact tank battle on the East-West German border in the Fulda Gap, a low-lying area for which military planners expected Soviet tanks might pour through toward Frankfurt, Germany.

A proposito di A-10 Thunderbolt:


AIR FORCE ... The Boeing Co., St. Louis, Missouri, has been awarded a $999,000,000 (ceiling) indefinite-delivery/indefinite-quantity contract for A-10 wing replacements.
This contract provides for up to 112 new A-10 wing assemblies and up to 15 wing kits.
Work will be performed at multiple subcontractor locations in the U.S. and one subcontractor location in South Korea and is expected to be complete by Aug. 23, 2030.
This award is the result of a competitive acquisition and two offers were received.
Fiscal 2017, 2018 and 2019 procurement funds in the amount of $239,578,025 and are being obligated at the time of award.
The Air Force Life Cycle Management Center, Hill Air Force Base, Utah, is the contracting activity (FA8202-19-D-0004).


The A-10 Warthog will not be one of the planes the U.S. Air Force requests to retire in its upcoming fiscal 2021 budget request, a senior service official confirmed.
During a speech at the Defense News Conference on Wednesday morning, acting Air Force Secretary Matt Donovan stoked speculation that the service will retire the A-10 after announcing that its FY21 budget request will include “controversial changes” such as the divestment of legacy aircraft.
But speaking at the conference later that day, Lt. Gen. Timothy Fay, deputy chief of staff for strategy, integration and requirements, confirmed that the A-10 is not one of the aircraft under consideration for divestment and will stay in service until the 2030s.

"As a former A-10 pilot and commander of an A-10 squadron in combat, I know how critical the Warthog is to our military’s success in the air and on the ground,” said McSally.
“I led the fight to keep the A-10 from being mothballed and to secure this re-winging funding, so it is good to see the contract awarded to start re-winging immediately - before any planes are grounded.
"Our troops rely on the A-10’s outstanding and unique ability to provide close air support and combat search and rescue. The A-10 was specifically designed for these types of missions, so having it in the fight can make the difference between lives lost and lives saved. This contract will ensure we maintain this platform’s critical capabilities into the next decade and beyond.”