SÃO JOSE DOS CAMPOS, Brazil, Oct. 1 — It had been an uneventful, comfortable flight.

With the window shade drawn, I was relaxing in my leather seat aboard a $25 million corporate jet that was flying 37,000 feet above the vast Amazon rainforest. The 7 of us on board the 13-passenger jet were keeping to ourselves.

Without warning, I felt a terrific jolt and heard a loud bang, followed by an eerie silence, save for the hum of the engines.

And then the three words I will never forget. “We’ve been hit,” said Henry Yandle, a fellow passenger standing in the aisle near the cockpit of the Embraer Legacy 600 jet.

“Hit? By what?” I wondered. I lifted the shade. The sky was clear; the sun low in the sky. The rainforest went on forever. But there, at the end of the wing, was a jagged ridge, perhaps a foot high, where the five-foot-tall winglet was supposed to be.


And so began the most harrowing 30 minutes of my life. I would be told time and again in the next few days that nobody ever survives a midair collision. I was lucky to be alive — and only later would I learn that the 155 people aboard the Boeing 737 on a domestic flight that seems to have clipped us were not.

Investigators are still trying to sort out what happened, and how — our smaller jet managed to stay aloft while a 737 that is longer, wider and more than three times as heavy, fell from the sky nose first.

But at 3:59 last Friday afternoon, all I could see, all I knew, was that part of the wing was gone. And it was clear that the situation was worsening in a hurry. The leading edge of the wing was losing rivets, and starting to peel back.

Amazingly, no one panicked. The pilots calmly starting scanning their controls and maps for signs of a nearby airport, or, out their window, a place to come down.

But as the minutes passed, the plane kept losing speed. By now we all knew how bad this was. I wondered how badly ditching — an optimistic term for crashing — was going to hurt.

I thought of my family. There was no point reaching for my cellphone to try a call — there was no signal. And as our hopes sank with the sun, some of us jotted notes to spouses and loved ones and placed them in our wallets, hoping the notes would later be found.

I was focused on a different set of notes when the flight began. I’ve contributed the “On the Road”column for The New York Times business-travel section every week for the last seven years. But I was on the Embraer 600 for a freelance assignment for Business Jet Traveler magazine.

My fellow passengers included executives from Embraer and a charter company called ExcelAire, the new owner of the jet. David Rimmer, the senior vice president of Excel Aire, had invited me to ride home on the jet his company had just taken possession of at Embraer’s headquarters here.

And it had been a nice ride. Minutes before we were hit, I had wandered up to the cockpit to chat with the pilots, who said the plane was flying beautifully. I saw the readout that showed our altitude: 37,000 feet.

I returned to my seat. Minutes later came the strike (it sheared off part of the plane’s tail, too, we later learned).

Immediately afterward, there wasn’t much conversation.

Mr. Rimmer, a large man, was hunched in the aisle in front of me staring out the window at the newly damaged wing.

He fixed me with a steady look and said, "I don’t know."

I saw the body language of the two pilots. They were like infantrymen working together in a jam, just as they had been trained to do.

For the next 25 minutes, the pilots, Joe Lepore and Jan Paladino, were scanning their instruments, looking for an airport. Nothing turned up.

They sent out a Mayday signal, which was acknowledged by a cargo plane somewhere in the region. There had been no contact with any other plane, and certainly not with a 737 in the same airspace.

Mr. Lepore then spotted a runway through the darkening canopy of trees.

They tried to contact the control tower at what turned out to be a military base hidden deep in the Amazon. They steered the plane through a big wide sweep to avoid putting too much stress on the wing.

As they approached the runway, they had the first contact with air traffic control.

“We didn’t know how much runway we had or what was on it,” Mr. Paladino would say later that night at the base in the jungle at Cachimbo.

We came down hard and fast. I watched the pilots wrestle the aircraft because so many of their automatic controls were blown. They brought us to a halt with plenty of runway left. We staggered to the exit.

“Nice flying,” I told the pilots as I passed them. Actually, I inserted an unprintable word between “nice” and “flying.”

“Any time,” Mr. Paladino, said with an anxious smile.

Later that night they gave us cold beer and food at the military base. We speculated endlessly about what had caused the impact. A wayward weather balloon? A hot-dogging military fighter jet whose pilot had bailed? An airliner somewhere nearby that had blown up, and rained debris on us?


Whatever the cause, it had become clear that we had been involved in an actual midair crash that none of us should have survived.

In a moment of gallows humor at the dormlike barracks where we were to sleep, I said, “Maybe we are all actually dead, and this is hell — reliving college bull sessions with a can of beer for eternity.”

About 7.30 p.m. Dan Bachmann, an Embraer executive and the only one among us who spoke Portuguese, came to the table in the mess hall with news from the commander’s office. A Boeing 737 with 155 people on board was reported missing right where we had been hit.

Before that moment, we had all been bonding, joking about our close call. We were the Amazon Seven, living now on precious time that no longer belonged to us but somehow we had acquired. We would have a reunion each year and report on how we used our time.

Instead we now bowed our heads in a long moment of silence, with the sound of muffled tears.

Both pilots, experienced corporate jet pilots, were shaken by the ordeal. “If anybody should have gone down it should have been us,” Mr. Lepore, 42, of Bay Shore, N.Y., kept saying.

Mr. Paladino, 34, of Westhampton, N.Y., was barely able to speak. “I’m just trying to settle in with the loss of all those people. It is really starting to hurt,” he said.

Mr. Yandle told them: “You guys are heroes. You saved our lives.” They smiled wanly. It was clear the weight of all this would remain with them forever.

The next day, the base was swarming with Brazilian authorities investigating the accident and directing search operations for the downed 737, which an officer told me lay in an area less than 100 miles south of us that could be reached only by whacking away by hand at dense jungle.

We also got access to our plane, which was being pored over by inspectors. Ralph Michielli, vice president for maintenance at ExcelAire and a fellow passenger on the flight, took me up on a lift to see the damage to the wing near the sheared-off winglet.

A panel near the leading edge of the wing had separated by a foot or more. Dark stains closer to the fuselage showed that fuel had leaked out. Parts of the horizontal stabilizer on the tail had been smashed, and a small chunk was missing off the left elevator.

A Brazilian military inspector standing by surprised me by his willingness to talk, although the conversation was limited by his weak English and my nonexistent Portuguese.

He was speculating on what happened, but this is what he said: Both planes were, inexplicably, at the same altitude in the same space in the sky. The southeast-bound 737 pilots spotted our Legacy 600, which was flying northwest to Manaus, and made a frantic evasive bank. The 737 wing, swooping into the space between our wing and the high tail, clipped us twice, and the bigger plane then went into its death spiral.

It sounded like an impossible situation, the inspector acknowledged. “But I think this happened,” he said. Though no one can say for certain yet how the accident occurred, three other Brazilian officers told me they had been informed that both planes were at the same altitude.

I asked Jeirgem Prust, a test pilot for Embraer. This was the following day, when we had been transferred from the base by military aircraft to a police headquarters in Cuiaba. That’s where authorities had laid claim to jurisdiction and where the pilots and passengers of the Legacy 600, including me, would be questioned until dawn by an intense police commander and his translators.

Mr. Prust took out a calculator and tapped away, figuring the time that would be available to hear the roar of a jet coming at another jet, each flying at over 500 miles an hour in opposite directions. He showed me the numbers. “It’s far less than a split second,” he said. We both looked at the pilots slouched on couches across the room.

“These guys and that plane saved our lives,” I said.

“By my calculations,” he agreed.

I later thought that perhaps the pilot of the Brazilian airliner had also saved our lives because of his quick reactions. If only his own passengers could say the same.

At the police headquarters, we were required to write on a sheet of paper our names, addresses, birthdates, occupations and levels of education, plus the names of our parents. We were all also required to submit to an examination by a physician with long hair who wore a white gown that draped almost to his shins. We were required to strip to the waists for photographs front and back.

This, explained the physician, whose name I did not get but who described himself to me as a “forensic doctor,” was to prove that we had not been tortured “in any way.”

Again gallows humor rose despite our attempts to discourage it.

“This guy’s the coroner,” Mr. Yandle explained later, and then added, “I think that means we are actually dead.”

But laughs, such as they were, died out by now as we thought again and again of the bodies still unclaimed in the jungle, and how their lives and ours had intersected, literally and metaphorically, for one horrible split second. 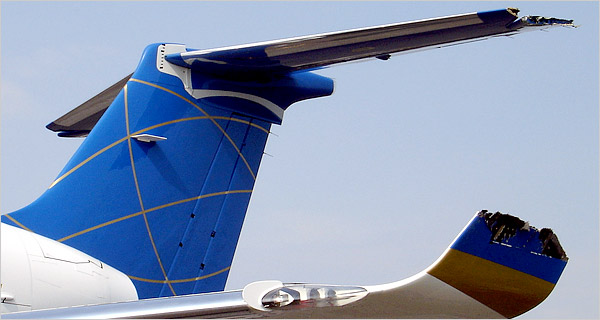 "Ladies and Gentlemen, this is your Captain speaking. We have a small problem. All four engines have stopped. We are doing our damnedest to get them going again. I trust you are not in too much distress."
Top